It's time for me to start writing. When I know that something is written, I can start to let it go--as in there are parts that I don't have to keep replaying in my mind over and over. I seem to write in chronological order by event so I'm just going to write as I can, as much as I can remember, about the day and days following my Gramma's death.

Thursday started out tough. We were slugging through our 4th day of school in our first full week of school. It felt like we were hitting a pretty good routine, but Anna was just being difficult. I had a feeling of heaviness and discouragement over some other things so I decided we would go to the library and pick up McDonald's for lunch.

In the car we ended up having a really great conversation. Josiah commented that it was hard to believe in God when we can't see Him. He and Aliza were going back and forth and then they started speculating about what hell is like. I joined the conversation and talked about how hell is eternal separation from God and that being separated from God is the single worst thing that could possible happen. We talked about how God created light and keeps the universe is motion and without that there is only utter darkness. We talked about how God is love and without God there can be no love and no good thing and how horrible that would be.

As that conversation ended I just admitted to the children that I was just feeling really discouraged. Anna immediately prayed for me. Aliza, in her wonderful 11 year old wisdom, told me that the best thing to do would be to only focus on the next thing instead of the whole day. That's what I attempted to do.

We pulled in to the library. I went to get Isaiah out of his seat and managed to bend my thumbnail back almost halfway down the nail. It hurt really bad and was bleeding. It didn't help my mood. We got our books and went to McDonald's. Somehow my order was misunderstood and I ended up with a bunch of extra fries and paying more than I usually do which annoyed me. Jeremy is so gracious though. He didn't get upset.

The afternoon went as planned. The kids watched their library DVD. Anna continued to refuse to do her schoolwork to the point that she was going to be working with Daddy after supper and I was getting supper ready when the phone rang. Called ID told me it was my Mom. I answered and she said, "Carla, Gramma just passed away."

The backstory: Tuesday morning my Dad told us that Gramma had fallen in the bathroom. She was taken by ambulance to PRMC and there is was determined that she had a break in her pelvic bone and that she shoulder was pushed into the socket. Surgery was not needed. The plan was that she would be moved to a rehab facility. I talked to Gramma on Tuesday and on Wednesday. She was in a lot of pain, but she was very happy to talk on the phone. Wednesday the nurses had moved her to sit on a chair the pain of which was almost more than she could bear. But she said, Carla, I'm going to pull through this. Thursday my Mom had visited Gramma for a few hours in the afternoon and after Mom left Gramma just slipped away. No one saw it coming or expected it.

So when I got the call from Mom I was shocked. I couldn't believe it. Over the matter of about a minute  it sunk in and I slumped to the floor sobbing. One of my first thoughts was that I had not visited Gramma in the hospital. I felt regret, but then it was the first moment that I reminded myself that Gramma is in heaven and doesn't care at all that I didn't visit her. Of course the children were with me and I told them right away that Great Gramma had died. Aliza cried. Josiah was tough. Anna didn't know what to think. Isaiah started acting out. Jeremy came home and the next hour was one phone call and text after another.

I chose to go to the hospital to see Gramma. I can't tell you why. I just knew that that's what I wanted to do. That is the time that keeps replaying in my head but I'm so glad I went. I sobbed. (I am now too, not sobbing, just tears falling!) It was my Dad, Mom, Grandad and Laura there and when the rest were ready to leave I couldn't go. Mom and I sat in the hospital room until the funeral home arrived. There was some miscommunication so it was a long time that Mom and I sat there. I arrived at the hospital after 6:00 and it was after 8:00 until the funeral home arrived. It was hard to walk out of the hospital room. 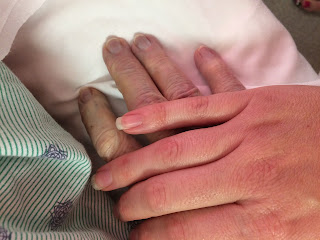 By 9:30 that night all of my siblings, my parents, and my Grandad were sitting in Grandad's living room together. I went straight for Gramma's camera. I wanted to see her lasts--the pictures that I will never order for her. The very last picture in her camera was her youngest great grandson (no surprise there!). 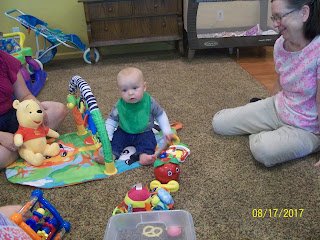 The last picture of her and Grandad: 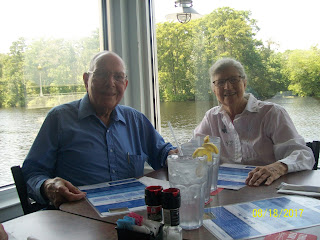 And the last picture of Gramma that Renee took after giving her a bouquet of silk flowers. 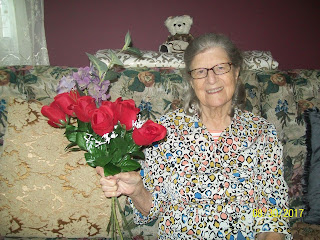 Gramma always sat the the far end of her dining room table to write letters. Her address book and piles of cards and pictures were always there for her to work on. That was my second stop. The last batch of pictures I ordered for her didn't quite make it out. We found all of the September birthday cards picked out, ready to be signed.

And there was an atlas on the table opened to Texas. I know she was following that storm and the places that were affected by it. My last conversation with Gramma in her house was about the hurricane and how she could contribute to the cleanup effort.

So we sat. Mom and Dad read to us Gramma's wishes for her funeral service. We talked and brainstormed and sat. And then I was utterly exhausted. I got home at 11pm to find Aliza still awake waiting for me. I slept very little that night.