A Heart in the Wood

Some days I decide that I'm going to get a whole bunch of stuff accomplished which is all great except that I get really frustrated when it's not getting done. Today was one of those days.

I decided that, after a year of looking at a gallon of paint, it was time to start painting the laundry room cabinets. My goal was small--to my standards--just one coat today, no more. I barely got started and realized that the brush I had was not going work, everyone wanted to help me and if they weren't begging to help they were needing something else. I thought I was giving up for today.

We did the errands we needed to do which included getting a different brush. I made some zucchini bread and got lunch. And then, while everyone was on the computer, I successfully painted until it was time to put Isaiah down for a nap. These days I rock him until he is almost asleep which has the effect of also practically putting me to sleep. So I took a break (that means I took a nap on the couch too) and then I finished the last little bit of the first coat. Success! I was feeling pretty accomplished and was ready to reward myself with a shower.

I got in the shower and there was no water. This happens every once in a while. The water pump decides to take a break and we have to go under the house and give it a good whack with a golf club and it works again. I've done this before--in the winter. I did not want to open the door to the crawl space. I've seen a snake come out of the crawl space and I have an extreme aversion to snakes. Even though I got what I wanted to get done, I had been snippy with the children when they were in my way and I was just feeling kindof yucky. So I, very maturely, sat on the porch step and whined.

My children gathered around to watch, I suppose. Isaiah was the first to grab a shovel and say, "I hit snake with shovel." Nothing like a 2 year old man to make you feel confident--or at the very least smile! Josiah got involved then and got out his BB gun ready to protect him Mama. And somewhere in the midst of all this conversation and dreading the task at hand I looked up and saw a heart in the wood. 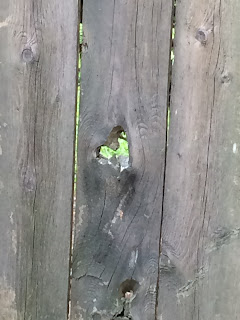 It was such a tiny moment and a tiny thing, but it caught my eye and I knew that these boys loved me and I was loved.

So Josiah asked if he could pump his BB gun and I laughed whole heartedly. Because all I could think of was him protecting me and ending up getting hit with a BB by an over zealous boy-man. He assured me the safety would be on.

I got the door to the crawl space open (nothing opens easily in an old house) and we looked all around for any movement. And then I stayed as far away from under the house as I could (which actually means my head was under the house) and I stretched as far as I could and gave that water pump 3 relatively wimpy whacks with the golf club. And got out of there as fast as I could. A minute or so later we had water again.

That little heart in the wood got my attention and changed my perspective so that I have had the most ridiculously productive and happy evening. Seriously, it's the little things that matter most.
Posted by carla at 10:56 PM